Our Quorn Arancini recipe is a meat-free taste of Italy. They are deliciously stuffed fried rice balls filled with Quorn Mince and fried until crisp and golden. 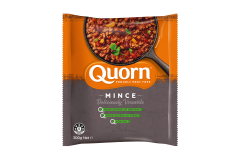 Enjoy a smoky twist on traditional tacos with this chipotle infused recipe. The chipotle paste, garlic and onion mix...

Keep it fresh and healthy this summer with this flavourful Oriental-inspired Buddha bowl. It’s perfect for the BBQ,...

Heavenly flavours from the East, with fresh carrots, onions and garlic, coconut milk, herbs and spices, combined with...

Enjoy a healthy twist on a family favourite with this sausage and bean stew recipe. The smoked paprika and sweet...

As if pizza wasn’t delicious enough on its own, it’s made even better by topping it with Sloppy Joe-style Quorn...