For a deliciously light vegan salad, try our Quorn Vegan Crumbed Schnitzels with a mix of quinoa, raisins, pomegranate seeds and rocket leaves. 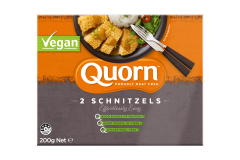 Made with Quorn Vegan Schnitzel

Vegan Apple and Schnitzel Salad with Coconut and Coriander Dressing

As if pizza wasn’t delicious enough on its own, it’s made even better by topping it with Sloppy Joe-style Quorn...

Throw together this Quorn Vegan Nugget bowl in next to no time at all. Simply add our Vegan Nuggets to fresh greens,...

Bursting with flavour, this sticky sweet and sour Quorn Nuggets recipe is sure to go down a treat with the kids....

Simmer Quorn Sausages in apple juice to create this delicious midweek feast that the whole family will enjoy.

A delicious, light and refreshing dish.